Gary Sugden in conversation with your Editor.

When in a phone call Malcolm Bates mentioned that he’d recently visited Gary Sugden and that Gary had a lot of stories about Shelvoke’s SPV Division, I thought it was too good an opportunity to miss.

There hasn’t been a lot in the Newsletter, or it’s predecessor the Magazine, about the SPV’s. Many of my correspondents are more knowledgeable about SD’s refuse collection vehicles, although there is considerable interest in the SPV Fire Appliances. So I welcomed the opportunity to redress the omission.

Much of the account that follows has been taken from Gary Sugden’s words on the telephone, with additional material from my archive of stories, and a lot of help from Malcolm Bates’ writing in Vintage Roadscene Archive No.11 SD -Shelvoke & Drewry. [Referred later in the text as Bookazine.]

The Photo above of Gary’s Boys was supplied to me by Roger Morrisroe..

Gary came to S&D as a young man in 1960 having served an apprenticeship as a Motor Mechanic and joined the Service Department. Here he met up with John Hill, John Holt, Reg Bowles, Jim Morley (who served 46 years at the company) , Jack Fitch, Eric Kilfoyle, “Charlie” Lawton, Frank Hopgood

among others. All under the control of Jack Arnold, the well respected Service Manager, who reported to Jack Wilkinson, Sales Director. Gary must have liked the people he joined to work with, and the work, because he stayed in the Service Department for 17 years!

Now in 1974 the decision was taken to discontinue the manufacture of heavy duty fork lift trucks, and the Special Purpose Division (SPV) came about to provide alternative work and income for the company. For various reasons the SPV Division didn’t get off to a good start and in 1977 Gary, who had been recommended by Harry Mansell, was sent for by Ron Nicholson an ex SD apprentice and the Manufacturing Director from 1975 – 81. “It’s make or break,” he told Gary “either you sort things out or the SPV Division will close.” Gary accepted the challenge and set to work alongside the refuse collection vehicle chassis line supervised by Steve Pearce, an SD apprentice 1950 – 55 and now Superintendent of the chassis line. Here 60 men produced up to 20 chassis of the ’N’ series per week. A far cry from your Editor’s time at the company when I think six men produced five chassis a week. 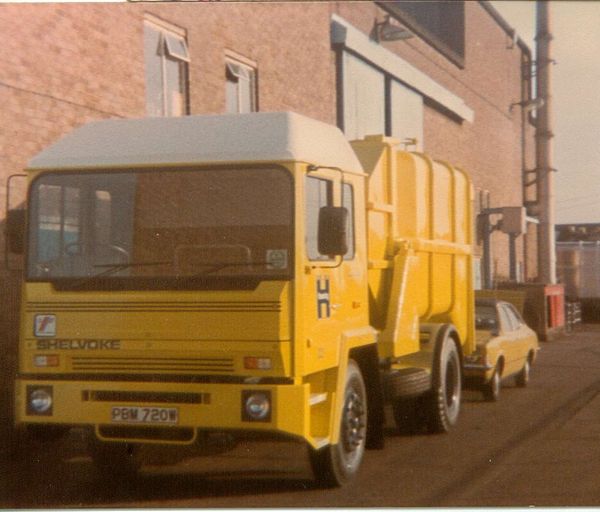 Gary was given freedom to recruit his own choices to his team, and looking back he remembers:- “I chose well. They were a brilliant bunch of workers.” The majority were quite young, and ex-SD apprentices, and Gary was impressed by the quality of the training they had received. “They were all good lads,” he told your Editor.

With time the team grew to 40 personnel – a far larger enterprise than your Editor had imagined.

In part 2 we shall look at the SPV’s on exhibition display.